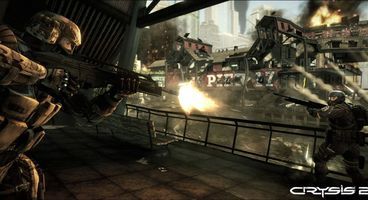 Last year, Crysis 2 and other Electronic Arts games were pulled from Steam, because of Valve's "restrictive policies". That is, Valve wanted a cut in the downloadable content, which led to EA introducing Origin.

Crysis 2 has returned to Steam with a special Maximum Edition, which features all of the DLC released on the game including the Retaliation and Decimation packs with nine additional multiplayer maps supporting all game modes and two new weapons (FY71 assault rifle and M18 smoke grenade).

The Maximum Edition also includes a bonus XP with access to preset classes, plus a custom class; scar assault rifle; day-one access to scar hologram decoy; and a unique platinum dog tag that allows players to display their multiplayer rank and stats.

If that weren't enough, those who bought the Steam version of Crysis 2 before it was pulled can get the Maximum Edition for a heavy discount.

Don't expect other DLC-supported games to arrive on Steam from EA, though. Crysis 2 Maximum Edition features all of the DLC it'll ever get.