Hero Academy coming to Steam on the 8th August

30 June 2012 | By Jonah A. Falcon
Robot Entertainment has announced that their popular iOS app, Hero Academy, is coming to Steam on the 8th August, and will feature crossplatform gameplay between iOS and PC. In addition, the Steam version will come with a Team Fortress 2-themed team, as well as unlockable Team Fortress 2 items.

Hero Academy is a tactical strategy game with asynchronous multiplayer. Players select five moves from a range of options including movement, attacking, defending, or adding powerful items to the battle. Once the moves are confirmed, they play out on the other player's turn. The strategy comes from character selection, countermeasures and the strategic placement of items. 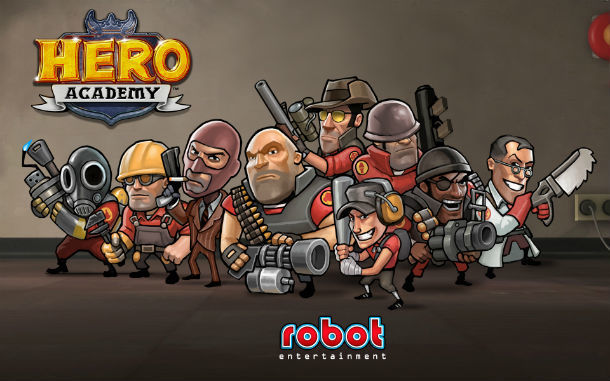 The official bullet-list of features includes:

* Cross-Platform Multiplayer Gaming – Challenge friends on Steam or iOS to asynchronous one-on-one battles via online multiplayer. Play a heated bout in twenty minutes or across a full day, whenever you have a few moments. Play all of your Hero Academy matches at your desk, on your iPad, or on the go with your iPhone!

* Exclusive TF2 team – The Steam version of Hero Academy includes the Council starter team and an exclusive new team featuring characters, upgrades, and abilities from Team Fortress 2! You can only unlock this team via Steam, but once unlocked you can use them anywhere that you play Hero Academy.

* Quick to Learn – Casual players can attack without mercy, while tactics game buffs will love the strategic cat-and-mouse gameplay

Robot Entertainment has not revealed the price of the game yet, but it won't be a free ad-supported title as it was on iOS.