31 July 2012 | By Jonah A. Falcon
Many veteran gamers have fond memories of vector graphic games, whether as a coin-op arcade cabinet such as Star Wars or the Vectrex home console. These are the gamers most likely to coo with delight at Vektropolis, which is not only a vector graphics title, but developed by the same fellow who helped work on both Star Wars and the Vectrex, David Gallagher. He is the head of the Leeds-based studio Dark Computer Entertainment.

The game, which is being released on the 21st December, is more of a three-dimensional shooter variation of Battlezone, where players zip through a vector-representation of a city, rescuing civilians while being attacked by enemy ships and tanks.

Mere words cannot accurately depict what the game is like - fortunately, DCE released a teaser trailer showing off gameplay. 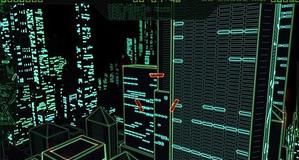