01 August 2013 | By Joe Robinson
We’re a little over a month away before Total War: Rome 2 lands on our shores, and I’m trying not to get too hyped up about it. As good as it looks; there are still several points to consider: Will the AI – which has traditionally not been great – be as good as they claim it to be? Will the game’s scope (biggest game to date, inc. Empire), be manageable? Are the other playable factions fleshed out enough to make them meaningful experiences? There are still plenty of pitfalls that Rome 2 could fall into.

In the run up to September 3rd, I’ve been able to go hands-on with the game a few times, including playing the game’s ‘Prologue’ campaign. It’s a small 2-3 hour chunk of gameplay that’s designed to (re)introduce players to the core mechanics of the game, wrapped around a suitable narrative. The first half is fairly scripted, but it opens up for the last couple of hours as you lead up to the final objective. 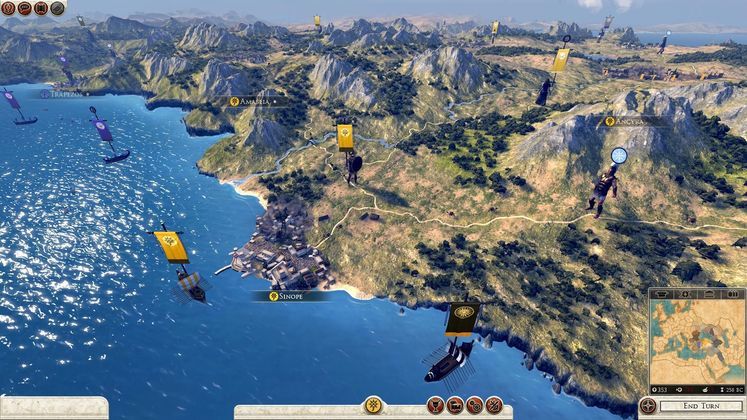 I’ve collated all my notes from these disjointed play sessions, and decided to share with you five of the most striking observations I’ve had about the game so far. These observations were taken from various preview builds of the game, so please bear that in mind:

Observation One: The AI might actually have a brain

AI programming in Total War games has always been lovably naff, especially on the campaign map. Every year the guys at Creative Assembly will assure us they’ve been working on it, and sure, in some areas you’ll see strokes of brilliance, but it’s mainly in the tactical battles. Eventually, you begin to intuit what the campaign AI may or may not do in any given scenario, making it unfortunately easy to ‘game’ at times. I’m happy to report that, finally, the campaign AI may have been given a kick up the bum.

Granted, this is based off of a limited play-through of the game’s opening mini-campaign, but it’s encouraging. On two separate occasions, the campaign AI surprised and pretty much out-manoeuvred me on the campaign map. The first instance was when, having secured a town, I sent my army via sea to secure another less critical town (which is covered in #2). Literally the next turn, another enemy army appeared out of nowhere to threaten my recent acquisition. I had to turn the army around, and it was only the fact that the enemy force decided to attack my troops instead of just taking the town, that I didn’t end up having to go through the whole process again.

On the second occasion, on a separate play through, I was smart enough not to make the same mistake twice, and kept my main force guarding the only land route whilst I trained an additional army to give myself some more mobility. So the AI, in a startling display of strategy, decided to go round to the coast, load up onto ships, and approach the town from the sea! I managed to spot it in time, thankfully, and the second army managed to get into position to defend the settlement. The AI kind of broke here, mind, as the enemy force then didn’t seem to know what to do with itself. For reasons lost to the mists of time, it decided sail off into the fog (of war), never to be seen again.

Rome II’s next true ‘evolution’ of the game engine is the ability to have hybrid battles – battles that can combine both land armies and fleets. Further to this, you can ground your ships on land at certain coastal points and have the crews get out and join your land army. Handy if you don’t think you can win against the opposing navy.

We’re happy to report that this also means you can load an army onto a fleet, besiege a coastal city from the sea, and even begin a siege match from the sea as well, with all of your troops on boats. It creates a fascinating scenario both offensively and defensively, even on a small provincial town with no walls. In fact – and while we didn’t get a chance to try this out – we imagine assaulting a large fortified city with walls from the sea would be an even greater challenge. You’d essentially have to sail straight into the port.

Unfortunately, for reasons unknown, this feature doesn’t go quite as far as you’d like. In playing through the Prologue, we were presented with an opportunity to attack a coastal settlement. We created a fairly typical siege army – troops, some ballista… even some cavalry, and then went and assaulted the city directly from the sea. It was pretty cool, and I decided to go for two pronged assault – my best troops would land directly in the town, and form a small beach head, whilst the bulk of my army would land outside the town limits, and advance that way. The ships made a b-line for the shore, sailors expertly grounding their triremes onto the sand. The remaining infantry disembarked, then the slingers, and finally came the cavalry and siege weapons, they went to grab their gear and… wait what?

Where are the Horses and the Siege Weapons? It seems that the engine is not so good as to have some method of showing horses and heavy siege weapons being disembarked from a ship. Essentially, all your cavalry are forced to fight on foot for that match, and all your siege operators are left to… well, have a cup of tea or something? It kind of soured the rest of the match, but at least I know now for future references – don’t attack directly from the sea if your army has horses, or siege weapons, or elephants or anything like that, as they won’t be there for that match. Best to land just up the coast, and then march to the settlement on land. 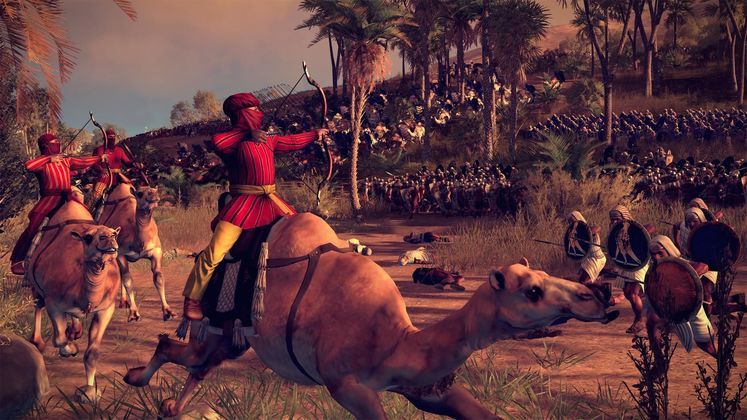 Something we’ve not really talked about much, Rome II has a new Line of Sight mechanic that’s a lot similar to Company of Heroes 2’s ‘TrueSight’ feature. Essentially, units can’t see other units if there’s no direct line of sight, and if your units can’t see them, you as a general can’t see them either. On the battlegrounds as potentially expansive as what Rome II can offer, this presents some interesting tactical challenges. It also compels you to use the terrain a lot more - If you hide behind the lip of a hill, you’ll be hidden, although there is still the feature where if your units walk through forest or dense shrubbery, they also get camouflaged.

This also applies to siege matches. If you’re fighting in a particularly dense urban environment, your troops may turn a corner and find an enemy unit there waiting for them. Scouting becomes very important, but there are some situations where you just have to tread carefully. The only way to really see what your true-sight range is though is to look at the mini-map. There’s no visual representation of the sight range units have on the battlefield itself, but the mini-map will show areas where your units can see.

It’s also rather creepy to zoom in and watch enemy units fade in and out of existence, like they were ghosts or something.

Empire management in Shogun 2 was fairly simple and straight forward – everything centred on the castle and castle-town of each region. Many build options like farms, special resources and the castle itself were the same region to region, but there was room for specialising as well with multiple options in the spare slots, and these were all self-explanatory.

In Rome 2, the regions are now grouped into provinces, with a provincial capital (like Empire/Napoleon, almost), and then smaller towns. The capitals have more build options than the towns, and whilst there’s still room for specialising, there’s also a lot more optimisation to consider as well. Provincial towns have to essentially support the capital through raw goods (and basic agriculture), while the capitals are more production and trade focused. Provinces and regions differ as well as far as unique resources go, and this then also differs depending on the location (Europe vs. Asia, for example). It’s also unclear at this point whether you’re able to send resources to other cities or areas. Historically speaking, a lot of Rome’s food came from other parts of the Empire, like Carthage (modern-day Tunisia) and Egypt.

The implied complexity of this new management system is going to take a lot of getting used to, and in my brief foray into managing an early Roman Republic, I was often scratching my head at what to build where, and what effect it would have. There’s still a lot of good feedback from the tool-tips that can help you, but an easy to use build tree also wouldn’t go amiss, just so you can see what leads to what and really study what all the buildings do. It’s important to note that my experiences only apply to the Roman faction as well – things will probably be different for other factions.

Not entirely a new concept in Total War games, Rome II features a lot more instances where capturing objectives is a valid method of winning tactical battles. You’ve always had siege matches, where the attacker has needed to capture one or several points within a settlement, but now even fighting out on the field, you can have battles that require one side to capture key points, in lieu of defeating the enemy army. For me though, this presents a problem of etiquette.

In my hands-on time with the game up till this point, there’s been several instances where I’ve been able to take the control point quite easily, even when most of the enemy army is still in play (and in one instance, where I was technically losing). Each time I always asked myself, do I go for it? Or do I let the match play on for a bit? It would be the polite thing to do, after all. 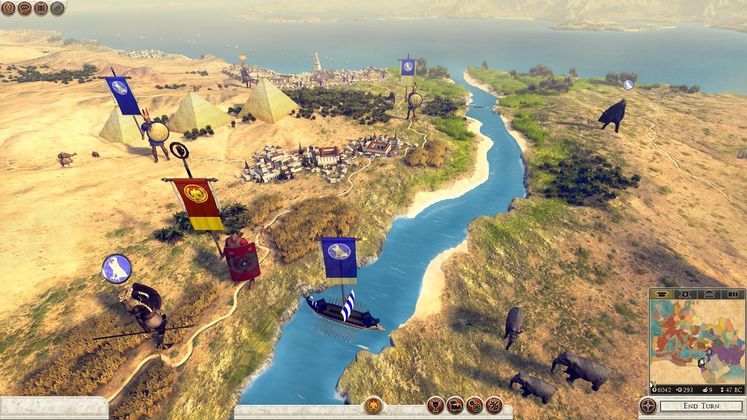 This could again bring into question the competence of the AI – but to be fair this is code from earlier in the year, and even now I’m told they’re still optimising things. Also, if I was playing against another player, I can’t imagine they’d be stupid enough to leave a vital capture point unguarded. So this is only really something that applies to fighting the AI.

There you go – five things that have struck me about the game so far. I know it’s only really based on preview code, but for some things it’s hard to imagine things changing drastically before the final product. All that they’ll be doing at this stage in the run up to going gold is tweak, optimising and bug fixing. Some of the AI stuff may get improved upon, but the rest is probably going to remain the same. I’m still looking forward to it, and you guys will be able to get your mits on it on September 3rd, 2013.