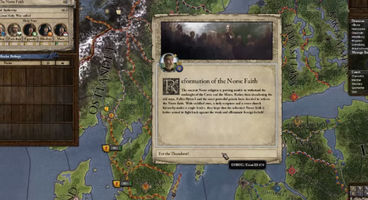 Crusader Kings 2 is going to get "a lot of love" soon for its Pagan leaders as Paradox unveil The Old Gods add-on, which "pulls back the earliest start date" to 867 AD, which is a "huge difference" from 1066 AD.

England for one will have a 'rampaging heathen army' knocking about the place. It's a "huge game changer" to everyone as they add another 200 years. The Old Gods is released May 28th.

This latest expansion was announced back on January 31st by Paradox's CEO, Fredrik Wester. It unlocks Norse, Baltic and Slavic pagans as well as the Mongols.

Another significant 'game changer' to the game is that Paradox is adding major rivers to the European landscape which can "only be traversed by Norse culture characters", leading the Vikings to go form Rus and looting in the Caspian Sea. Check out the first of three planned developer diaries for The Old Gods below.