There's "no lack of ideas" at DICE, CEO ponders local weather for Battlefield 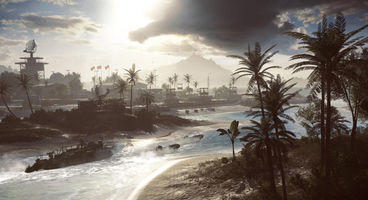 Battlefield 4 supports a geo-leaderboard, says CEO Patrick Soderlund of DICE, which tells you the best players in your local area. What if they could pull your local weather too and have it appear in-game?

Soderlund says that's "frankly one dumb idea from me, but it's kind of cool!" The cloud-based world we now inhabit allows for so many more experiments with features.

“I sit the floor above the Battlefield development team and there is no lack of ideas down there,” he told The Guardian. Hopefully those ideas include 'trouble-free launch'.

”It’s just a matter of, how many of them are feasible and how many can we do," he continued. The studio boss revealed one of his ideas that didn't quite make the cut this time around, but there's always the future to look forward to.

"One of the things I think is cool in Battlefield 4 is the geo-leaderboard – you can find out who in your neighbourhood is, say, the best best assault player,” he said. “That’s cool. And so let’s take that a step further and say, what if we had servers where it pulls in just things as simple as weather and day time from the local area."

"If the server is in Stockholm and it’s sunny, what if the map is sunny, too? What if it’s snowing and dark in Moscow? Okay, let’s have the servers there playing snowy and dark maps. You look at the possibilities and realise you can do so many more things in the cloud-enabled world than we couldn’t do before."

"That’s frankly one dumb idea from me, but it’s kind of cool!”

What if we want to escape the tyranny of our local weather? Norway and Iceland 'enjoys' perpetual darkness for eons, don't they deserve some artificial sunshine in their lives? If it's an online match whose local weather gets applied? Maybe stick with the ambition of launching a new Battlefield without woeful troubles first.