Ancel: Beyond Good & Evil project "always have in mind" 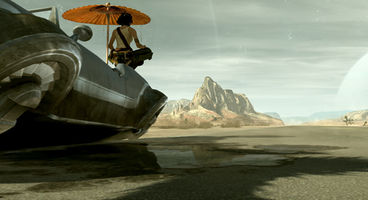 Michel Ancel, creator of Beyond Good & Evil, has said now that the new consoles are "around the corner we're working on them," with Ubisoft figuring out how to squeeze them for all they're worth.

They are "still things we need to understand" on them, and admits he has Beyond Good & Evil 'always in mind'. He adds "it'd be painful" to bring out a new game on Xbox 360 and PS3.

It's been said before that the scope in mind for a sequel to Beyond Good & Evil would be too great for what the current systems could endure, without making big sacrifices.

"Now that we have the consoles around the corner we're working on them," Ancel told Gamereactor.

"We're trying to see how we can get the power out of those consoles because there are still things we need to understand on those consoles, but yes, Beyond Good & Evil is a project I always have in mind and I hope good things will come for this project very soon."

A new Beyond Good & Evil was teased way back but since then never materialised, and all PR for it dried up. Michel Ancel says the sequel on current consoles "was possible, but it'd be painful. It's always possible to do anything on any kind of console, but sometimes you need to spend your energy not on the optimizations or things like that."

The Beyond Good & Evil 2 teaser below was released back in 2008.