We might finally find out what Beyond Good and Evil 2 is, with luck.

All the details on E3 2018, including date, schedule, games, conference times, predictions and more!

We know E3 is usually the time to get exited for all those new release trailers and announcements; but don't go thinking now's the time for Beyond Good and Evil 2. It won't be there.

Ubisoft Confirm Beyond Good And Evil 2 In The Works

Though it was never directly shut down by those barking at Ubisoft for confirmation as to whether we'd ever see another entry into the Beyond Good and Evil world, a stray Instagram shot by creator Michel Ancel has reignited hope of the dream becoming a reality.

The image - seen here - has since been tweeted out by one of Ubisoft's many regional Twitter accounts seemingly confirming their involvement in the concept art despite the fact the original post even has Michel directly thanking them for 'making this possible'. 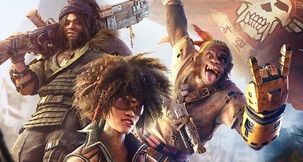