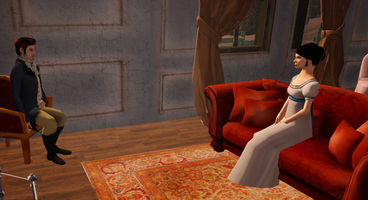 An MMO all about gossiping? Ever, Jane has achieved its $100,000 goal and is now on its way to spread societal mischief in Regency Period England. There's no killing, only spinning tall tales at dinner parties.

Gossip is the weapon of choice and it is how rivals are vanquished. A prototype of this Ever, Jane is available with a 3D village full of bowing, curtsying and backstabbing.

Balls, dinner parties, mini-games and families inhabit the world of Ever, Jane. Players invite others to attend their social gatherings and it's here the sparring begins.

Everything works on a social hierarchy basis with the goal naturally to ascend and be the biggest wig of them all. It's the gossip that can undo one another, with the choice of male or female characters having a dramatic effect on how the game plays out. Mini-games including fishing, hunting, sewing and embroidery.

"Ever, Jane is an on-line role-playing game set in the virtual world of Regency England and the works of Jane Austen. Unlike many multi-player games, it's not about kill or be killed but invite or be invited. Gossip is our weapon of choice. Instead of raids, we will have grand balls. Instead of dungeons, we will have dinner parties."

It's certainly a break from the usual MMORPG flavour. Check out the Ever, Jane Kickstarter for more.