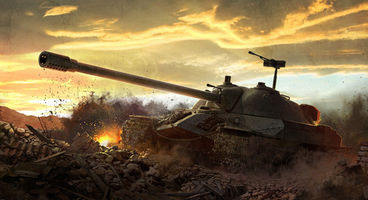 The dirty, dirty business of paying to win in free-to-play games is something Wargaming.net can't stomach anymore as they move to drop any real money purchases for items that would 'grant an advantage'.

World of Tanks will be purged of these offending items, and instead embrace what Wargaming.net is calling a "free-to-win" strategy. Basically, real money can only buy cosmetic items... like gold tanks.

This won't only be applied to World of Tanks as the studio's upcoming World of Warplanes and World of Warships will also be devoid of 'pay-to-win' sin.

The reason Wargaming.net is backing this move is because they want to be taken far more seriously in the eSports arena. They've been pondering these changes to their business model since 2011. They started testing this fledging idea of non-advantageous items in 2012 when non-paying players could start buying customisation items like camouflage etc.

They feel that adopting "free-to-win" will increase loyalty among the community and give them greater integrity.

"We've been working on for the idea of "free-to-win" for quite some time now. The conception stage began in 2011, after we took the time to tackle some internal challenges spurred on by the company's rapid growth," Wargaming.net told Gamasutra in an exclusive Q&A.

"Elements of what would later become free-to-win were first tested in 2012. We made in-game purchases that were previously only available to paying players open to all players. Things like gold rounds, premium consumables, camouflage patterns, emblems, platoon creation and other features were switched over to be purchasable with in-game credits."

"Our analytics team carefully monitored how players reacted to these changes, whether they were newcomers, veterans or clan members," they continued.

"The player community is very sensitive to changes, especially when they concern a monetization system. That's why we fully focus test any changes we plan to make and introduce only those new features that receive positive feedback."

"Wargaming is a company delivering free-to-play online games, and we strongly believe that you can't provide a truly triple-A free-to-play experience without absolutely making sure all combat options are free of charge to all players. We don't want to nickel and dime our players -- we want to deliver gaming experiences and services that are based on the fair treatment of our players, whether they spend money in-game or not."

Check out the full Q&A for more on Wargaming.net's explanation of this free-to-win strategy.