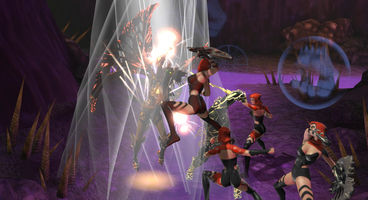 Sony Online Entertainment has announced that, as promised, the Sons of Trigon downloadable content pack for DC Universe Online is now available for PC and PlayStation 3. The DLC will revolve around Wonder Woman and Circe, as Gotham City is literally put through Hell.

"Sons of Trigon DLC picks up where the Sins of the Father storyline left off. Through blood ritual, Trigon escaped his dimension and was preparing to attack the Earth. However, he became trapped in a different dimension -- a nightmare version of Gotham City, a wasteland filled with sin," describes the press release, "In this new DLC, Heroes and Villains will explore this wasteland as they race to confront Trigon and three of his sons, who each represent one of the seven deadly sins. Players will also encounter Raven and the Teen Titans, the Fearsome Five: Psimon, Mammoth, Jinx, Gizmo and Doctor Light, Gentlemen Ghost and John Constantine. "

The Sons of Trigon DLC includes the following features:

* New alert, "The Mausoleum" - featuring a final battle with Trigon

* New Gear, including PvE iconic gear based on Brother Blood and Raven

The content pack is a free for Legendary subscribers, and $9.99 USD for other membership levels.