Xbox One Day One Edition almost sold out in UK 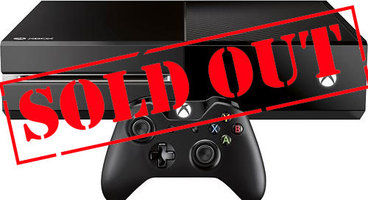 According to a survey of UK retailers, the Xbox Day One console is just about sold out in the region. The Day One Edition will include a free FIFA 14 download, while the standard edition will not come with one.

GAME is now only selling a Day One Edition bundle for £614.98 bundle, which comes with the expensive Call of Duty: Ghosts Prestige Edition (which costs £179.99 includes a 1080p videocamera); FIFA 14 will naturally also be included. Shopto is also only selling Day One bundles, from £489 (includes Battlefield 4 and £15 Microsoft Store credit) to £575 (includes Ryse, Watch Dogs, £10 Store credit and an extra Xbox One controller).

Some stores have extemely limited supplies of the Day One Edition without a bundle, including Currys, GameStop, Blockbuster and Asda. Microsoft itself is still selling some Day One Editions.

Amazon has sold out, as has Zavvi, Tesco and Toys R Us.

The Xbox One will be released sometime in November in the UK. The PS4 had already been sold out due to limited supply.