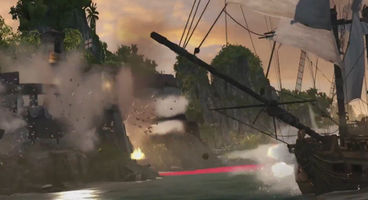 In an exclusive interview, Eurogamer has snagged some high seas swag from Ubisoft Singapore. Assassin's Creed IV: Black Flag features some tense naval fort battles for us to sail into.

There are 11 heavily armoured forts around the Caribbean to be discovered, and then overpowered. Once a fort's defences crumble we go on foot to take control and fly the Black Flag.

When we've dispatched of the fort's previous owner we'll be able to use them ourselves as safe havens, and even lure enemy ships to them for easy pickings.

What's more they provide a series of side missions to be completed. Of course before that you'll need to master your Captaining as these forts pack serious firepower. It's possible in the future that Ubisoft will allow a 'fort reset' option, like how a Far Cry 3 patch let gamers reset outposts, but this depends on feedback.

Ubisoft Singapore also confirm that PC, Xbox One and PS4 versions will enjoy extra visual flair when taking down these heavily fortified naval positions, but that Xbox 360 and PS3 will remain impressive nonetheless.