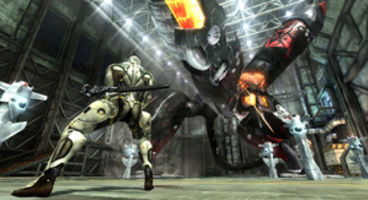 A writer for Metal Gear Rising: Revengeance has revealed that the announced story-driven add-ons will be serving up prequels to give fans backstory on two boss characters, before they cross Raiden.

Chief story writer Etsu Tamari was also adamant that "a cyborg needs a canine partner," and it's why Blade Wolf sides with Raiden as Revengeance plays out. Man's best friend, even if synthetic.

Jetstream Sam and Blade Wolf are the stars of the two DLCs. They felt this would better explain why things are the way they are, and that means we'll have to play as them.

"We don't directly explain why Sam works with Desperado in the main story," Etsu Tamari told Famtisu, "so that content goes a little bit more into detail on it. The Blade Wolf sub story depicts a mission it's running with Mistral before the encounter with Raiden. Both of them serve as prequels to their roles in the main game."

The whole reason for Blade Wolf existing in Revengeance was because of Tamari-san.

"I told people that a cyborg needs a canine partner, and I stood really firm on that! I had trouble figuring out what sort of position it would take in the game, and eventually I came up with the idea that Raiden would take over the 'teacher' role for Blade Wolf, the way that Snake was his mentor in MGS2."