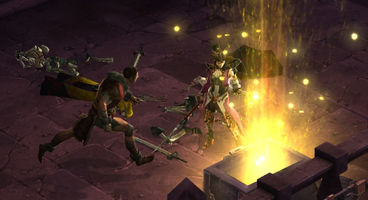 The role of the Auction House in Diablo III has been a contentious one and Blizzard is now looking to "reduce the impact" it has on the game by making loot drops fewer, but of higher quality to get us excited slaying beasties.

Overall, new game director Josh Mosqueira wants items to "feel more meaningful" and so wants to stop that "end-all-be-all" vibe about the Auction House when it comes to character progression.

He admits it does add value for some of the fans but right now it has too much influence over characters getting fully geared up for the higher difficulty runs.

"In the year since Diablo III launched, we've made good strides, but there are still things we can improve and new surprises in store for everyone," blogged Josh Mosqueira. "We want items to feel more meaningful, and we want players to be excited about the next loot drop. Our goal is to make the loot experience more enjoyable for ALL players."

"This includes reducing the amount of loot that drops while improving the overall quality, introducing targeted Legendaries, and giving players ways to directly customize their character's armor—both visually and mechanically. We're also looking into ways to reduce the impact of the Auction House. While we think the feature does provide a lot of value, it shouldn’t feel like the end-all-be-all force driving character progression."

Check out Mosqueira's full blog on what he has in mind for Diablo III marching forward.