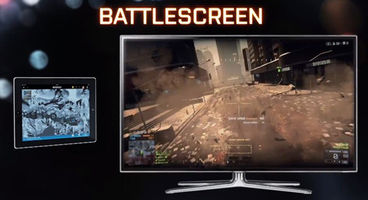 Xbox 360 and PS3 gamers of DICE's Battlefield 4 will not be able to take advantage of the Battlescreen feature, which provides the option for a second-screen to be utilised for a tactical map overview.

PC, Xbox One and PS4 gamers will get to leverage their tablets with Battlescreen. Fault lies with "the web", says Battlelog assistant producer Jesper Nielsen.

It's unclear how the return of Commander Mode will be affected by this revelation, as DICE have promoted it as being perfect for tablet devices to compliment matches.

"Battlelog is powered by the web, and that has a lot of implications. There are a lot of different things you can do, things you can do faster, rather than building stuff in native code," Nielsen told Engadget. DICE made it a goal to get the Battlelog environment onto the consoles, but it’s hard for Xbox 360 and PS3.

"It's going to be a lot easier for us to actually update things from the in-game Battlelog than would otherwise be the case. You'd have to do patches normally; here we can actually do things almost by the flick of a finger," he said.

EA had made the process of Battlelog cumbersome. "At some point, maybe half a year before, they connected their Origin account to this email address and now they forgot what it is. And they tried, they can't remember it, so they give up." They plan to use a built-in QR code scanners to quickly and efficiently connect Battlelog'd tablets to consoles. "It might sound trivial, but it's actually making something that might be problematic for people super simple," said Nielsen.