07 September 2013 | By Jonah A. Falcon
Rebellion has announced a sequel to the spinoff standalone expansion to Sniper Elite V2, Sniper Elite: Nazi Zombie Army 2, which will be coming out on PC later this year, with next-generation console versions under consideration.

The game puts the player in the role of OSS agent Karl Fairburne, who must snipe zombie Nazis in the middle of a zombie uprising thanks to the occult. The campaign is intended for up to 4 player co-op.

According to creative director Tim Jones, "We really wanted to heighten the demonic, nightmarish tones of the first game. The environments, the levels, the soundtrack all give a strong feeling of descent - each encounter, each level becoming progressively more hellish. Most importantly though, we've expanded the legions of Nazi undead with some really intimidating new enemies which we'll reveal soon."

Sniper Elite:Zombie Army 2 will be self-published by Rebellion, but fans of the original game need not worry, Sniper Elite 3 will be coming to PC, Xbox One and PlayStation 4 next year. 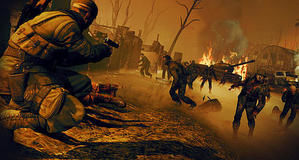