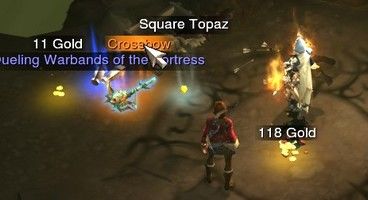 Blizzard has announced that the upcoming 1.0.8 patch for Diablo III will make Legendary items rarer, as well as tweaking their stats so that they match the monster they dropped from.

According to designer Travis Day, "When a Legendary drops, the question that goes through a player's mind should never be 'is this a good item?' It should be 'how awesome is it?'" Rare items will also be rarer and adjusted to monster level.

Senior technical game designer Wyatt Cheng has also stated that the patch will improve co-op farming mechanics. "We are looking to improve co-op farming efficiency in 1.0.8," Cheng revealed. "Co-op play in general is a big focus of the 1.0.8 patch and efficiency is definitely one component of that. Co-op is already more efficient for some players, but this is the exception rather than the norm. The degree of co-op efficiency depends heavily on the co-ordination of the party, skill builds, and the relative gear level of the teammates. Since launch we've made some modest changes to encourage co-op play but there's still room to go farther."

Finally, the patch will also include the multi-craft, and the ability to directly compare items players look to purchase against current equipment.