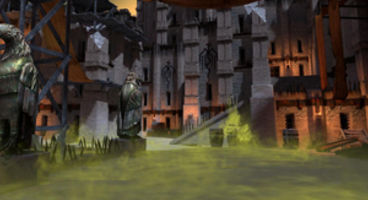 Dragon Age lead writer David Gaider, with 14 years of veterancy at the RPG studio, has admitted he spends less time among online fans at the official BioWare forums due to user 'toxicity'.

It can make him "feel negative" if he spends a little too much time among them, remarking that the "signal-to-noise ratio does seem to be worsening," driving him and others away.

The game writer goes as far to say it feels like being at "one of those parties where all anyone is doing is bitching." Sticking around tends to bring out your own 'point scoring' troll.

"They are certainly a group of passionate folks, and while I wouldn’t say they were all “utterly gross” as you put it I do agree that the overall tone of the forums has become increasingly toxic," blogged David Gaider, in response to a fan.

"I tend to largely avoid them these days, myself. Why? Because spending too much time there starts to make me feel negative— not just about the games we make, but about myself and life in general," he continued. "That’s not a good feeling to have. I’m sure there are folks there who would bristle at that comment, suggesting that all negative feedback is justifiable and that ignoring it is the equivalent of us sticking our heads in the sand."

"You can, in fact, meet and talk to some very keen and intelligent posters. And that’s very true. If it weren’t true, I wouldn’t go there at all. Yet the signal-to-noise ratio does seem to be worsening, and eventually you get the feeling like you’re at one of those parties where all anyone is doing is bitching."

"It doesn’t matter what they’re bitching about so much as, sooner or later, that’s all you can really hear," added Gaider.

"Engaging starts to mean partaking in the bitching until you feel like that’s all you’re doing. Even when I try to rise above, those who are most negative will seek me out in order to get a rise out of me— and not unsuccessfully. I am only human, and I’ll end up responding to score points just as they do, and end up feeling shitty for having done so."

The problem tends to snowball, he argued, where "polite, reasonable folks" are driven away or convinced to stay quiet meaning that those making all the noise are surrounded by those who agree with them - "and, because that’s all they see, they think that’s all there is. Everyone feels as they do, according to them."

"Once the tipping point is passed, you’re left with the extremes… those who hate, and those who dislike the haters enough to endure the toxic atmosphere to try and combat them. Each clash between those groups drives more of the others away." The Dragon Age scribe is thankful it's not the only place to meet and get feedback from fans.

"I suspect you’d get a skewed opinion of almost any game if you went solely by its dedicated online community. They certainly serve their place, and if you want to gauge the temperature of the hardest of the hardcore’s opinions about core matters there’s probably no better place to go… but representative of all fans? Not in the slightest."