Maxis have "no intention of offlining" SimCity, could happen to 'earn back trust' 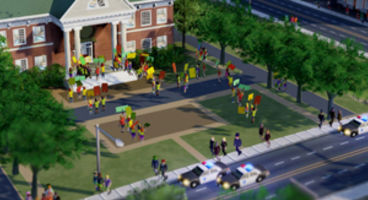 General manager Lucy Bradshaw of Maxis has said in her latest blog that the "core problem" with SimCity is "almost behind us," as the studio continues to add and tweak servers. 8m hours of gameplay logged.

Apparently they've reduced game crashes by "92% from day one." There are "still some elements" preventing an 'all-clear' but they're getting there. As of now, Maxis has "no intention" of an offline mode.

She wouldn't completely rule out an offline function though, saying "we'll look into that as part of our earning back your trust efforts." SimCity will remain online until then.

"I’m happy to report that the core problem with getting in and having a great SimCity experience is almost behind us. Our players have been able to connect to their cities in the game for nearly 8 million hours of gameplay time and we’ve reduced game crashes by 92% from day one," blogged Lucy Bradshaw.

Early adopters of SimCity are set to receive a free game from EA as a sorry.

"A combination of optimizing our server architecture and response times, deploying these enhancements on both a series of new and the original servers and issuing a few critical client updates has achieved getting virtually everyone into the game and, once in, having a great time building cities and sharing regions."

She continued: "We need a few more days of data before we can assure you that the problem is completely solved and the game is running at 100 percent." SimCity is said to 'need' a persistent connection to Maxis servers in order to run the GlassBox simulation engine which controls everything running in the game.

While connections to the servers have been vastly improved, the cities suffer from delayed trades with neighbouring cities which can severely hamper gameplay. A number of 'non-essential' features remain switched off.

SimCity's launch week has been a tremendous strain on both fans and Maxis. EA has even taken to suspending all online marketing campaigns, and retailer Amazon has delisted the game entirely.