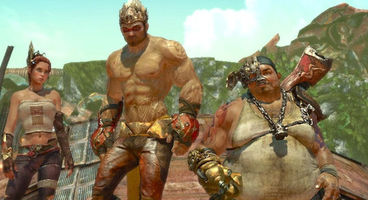 After the Australian classification board rated 'Enslaved: Odyssey to the West - Premium Edition', Namco Bandai has come out confirming its existence and that will it will hit Xbox 360, PS3 and PC.

Presumably the Pigsy's Perfect 10 add-on is included as part of the Premium Edition. While no concrete date is set, a Namco rep said it was due later this month for PS3 and PC.

While critically lauded, Ninja Theory's Enslaved - which is a re-imagining of the Chinese tale Journey to the West - never managed to secure high game sales.

Namco Bandai confirmed the Premium Edition to Polygon, also revealing a PC version. Steam was found to have 'Enslaved' in its database entries months ago, making a Steam release all but certain.