11 December 2013 | By Jonah A. Falcon
Digital Tribe has announced that the Xbox Live Indie Game smash hit FortressCraft is now on Steam Early Access, with an official release date coming in March 2014. The PC version is dubbed FortressCraft Evolved. The Minecraft-style game will cost just $5.99 USD, which is 60% off the proposed full launch price.

According to the developer ProjectorGames, the Evolved version features new tech, with better building tools. Creator Adam Sawkins gushed, “Almost every game released these days is focused on destruction. I want to provide players with the best tools I can to create and share anything their imagination can muster!”

FortressCraft Evolved has the following features:

* Create the largest worlds ever seen in any computer game.

* “Build to Me” Feature for rapid macro building.

* Personalize with intricate detail blocks and share them on the Steam Workshop.

* Additional features to be announced as the game develops.

Back in May, Sawkins revealed the indie game sold 750K units at $2.99 USD a pop on Xbox Live Indie Games. 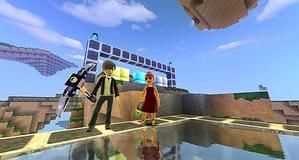