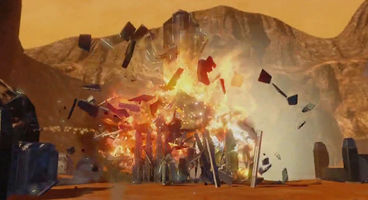 Why can't we go blasting through buildings in Saints Row? Developer Volition Inc. did create the Geomod tech to let us roam round as a wrecking ball on Mars in Red Faction after all. The problem is 'density'.

Senior producer Jim Boone says they've "talked about it so many times" at the studio, trying to somehow get Geomod into Saints Row, but it proves a technical 'impossibility' for this gen at least.

There simply isn't enough computational power available to handle all the destruction in such a densely packed playground, compared to the barren Mars.

"We’ve talked about it so many times yeah, and the problem is it’s just not feasible with the engine," Boone told VG247.

"...that system of Geo-Mod 2.0 where you’re doing really exotic, large buildings, the technology behind that is so amazing and also so restrictive at the same time, that the problem is that the density of buildings you can do with that engine literally couldn’t come close to being done to represent the kind of cities we do in Saints Row."

"And so if you’re familiar with Red Faction: Guerrilla or Armageddon, you’ll notice we don’t have a tremendous density of structures – talking about very large structures – and that’s because we push these platform to the nth degree just to be able to do those buildings in the way that we’re doing them, in order for them to break apart in the way that we do."

“So what that means is that technically, it’s literally impossible to apply that tech in the same way that we’ve done it to that kind of density that you would expect from a Saints Row game. We talked about it a lot like, ‘Is there something we’re just missing? Is there some other way of doing it?’ and there’s just no way we’d be able to do it in the way that we’d want to.”

Might the added muscle of newer PCs and the arrival of Xbox One and PS4 challenge the improbable?

"My concern is that, it would suddenly make this much more possible – whether it’s totally possible, I suspect it probably would but I’m not certain – but here’s the issue: we would still have to make compromises to the graphic fidelity by still sharding it up and making it so they can break apart and all these pieces," mused Boone.

"My suspicion is that if you looked at another game coming out that didn’t have that technology, that their buildings would look so superior to ours, the gamers would still look at it and say, ‘Wow, what’s wrong with Saints Row, why does it look so horrible? I know the buildings come apart but you know.’"

"It’s tough to communicate, and we always had that problem even on Red Faction, that there’s no easy way to clearly communicate that yeah, the graphics may not be as amazing as these other cutting-edge games, but look at the engine. Look at all these things it does. It’s just when you’re looking at a screenshot, or when you’re looking at a trailer you just kind of look at it and it’s like, ‘Nah, it doesn’t look as good as some of these other games that are out there’."

Too much visual sacrifice to satisfy our lust for destruction? "With the kind of competition that’s out there I think, I suspect it would almost be impossible to do it and still remain competitive visually,” he concluded.