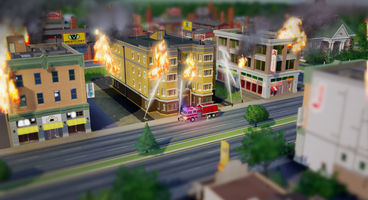 Rock Paper Shotgun claims that an inside Maxis source has told them that contrary to Electronic Arts' claims, the SimCity online servers are not involved with the calculations in the game.

Maxis general manager Lucy Bradshaw stated in an interview a few days ago that the game needs a persistent connection to Maxis servers in order to run the GlassBox simulation engine which controls everything running in the game.

However, an unnamed developer who worked on SimCity flatly states that the servers have nothing to do with anything in the game save the social aspects.

“The servers are not handling any of the computation done to simulate the city you are playing," the developer refuted, "They are still acting as servers, doing some amount of computation to route messages of various types between both players and cities. As well, they’re doing cloud storage of save games, interfacing with Origin, and all of that. But for the game itself? No, they’re not doing anything. I have no idea why they’re claiming otherwise. It’s possible that Bradshaw misunderstood or was misinformed, but otherwise I’m clueless.”

Various sites had already performed tests on the game. One site found the game ran fine for 20 minutes offline before it shut down due to the lack of internet connection; had the game required the servers to run Glassbox, the game would not have been able to perform at all. Even Markus "Notch" Persson tweeted "I like how you can keep playing Sim City even when it notifies you that the servers are down. (But I thought it REALLY needed them?)"

“Because of the way Glassbox was designed, simulation data had to go through a different pathway. The game would regularly pass updates to the server, and then the server would stick those messages in a huge queue along with the messages from everyone else playing. The server pulls messages off the queue, farms them out to other servers to be processed and then those servers send you a package of updates back," noted the source, "The amount of time it could take for you to get a server update responding to something you’ve just done in the game could be as long as a few minutes. This is why they disabled Cheetah mode, by the way, to reduce by half the number of updates coming into the queue.”

EA hasn't responded to inquiries yet - it'll be interesting to see how the company responds to this revelation.