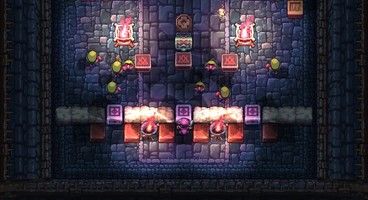 Indie developer Pixelscopic has announced that their 8-bit style action-RPG Delver's Drop is now being crowdfunded on Kickstarter and has also launched on Steam Greenlight.

Delver's Deep is reminiscent of the classic The Legend of Zelda: A Link to the Past, as players explore an 8-bit dungeon from a top-down perspective. The game features "8 zones of castle dungeons with 4 sub-levels to explore." The levels will be hand-crafted, but the content and floor layouts will be randomized.

Players can choose one of five character classes with unique speed, special abilities and perk trees. (The classes will partially be decided by backers, according to the developer). Players can gain experience which will remain set even if the character dies. In addition, the game "will feature interesting puzzles, requiring clever manipulation of dungeon elements, using physics to advantage, and resourceful usage of secondary items."

Pixelscopic states that Delver's Drop is aiming for a release in October 2013 for PC and Mac, for $15 USD. 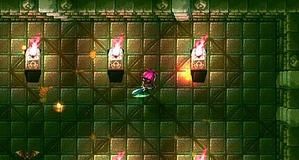