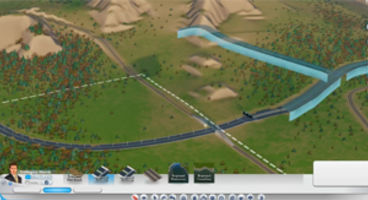 Stand aside MaxisMan, there's a new hero in town. Modder 'UKAzzer' has revealed that with a little tweaking of package files, SimCity can enjoy offline play without Origin sticking its nose in.

Not only that but he enabled debug mode which let him edit highways and rail lines outside of city boundaries, which even "saved safely on the server." Expanding cities "should be very viable".

The SimCity modder has even posted a video clip of his work showing that the highways are editable just like normal roads. This means we could connect up city clusters.

"So with a little bit of package editing within SimCity thanks to the modding guide posted to Reddit earlier, and a little playing about in the code, it's possible to enable debug mode," posted AzzerUK on Reddit. "Most developer debug features are disabled without having an actual developer's build (they have terraforming tools etc. available in the full developer build!), but a few things do still work - including editing the main highways."

He continues: "Not only that - but you can edit the highways ANYWHERE - even outside of your city boundary... and even if you quit the game and log back in later, it's all saved safely on the server."

"This shows that highway editing will be easily possible, AND that editing outside of the artificially small city boundaries should be very viable too, potentially (since you can place roads and rails that snap anywhere on-screen)."

Yet more embarrassment for Maxis follows...

Ocean Quigley from Maxis is 'supportive' of modders getting their coding mitts on SimCity package files, saying "go for it, but it'll be a little while before we can provide any support." However the most recent patch according to another Reddit user has rendered them 'read only' with debug mode unable to be switched on.

Maxis are still sticking to their always-online guns with general manager Lucy Bradshaw stating: "We offload a significant amount of the calculations to our servers so that the computations are off the local PCs and are moved into the cloud. It wouldn't be possible to make the game offline without a significant amount of engineering work by our team."

This however has been proven false numerous times and has already haemorrhaged trust between SimCity fans and the studio. Maxis continues to battle server loading issues but other more critical problems are also becoming evident like the grotesque inefficiency of the GlassBox agent system when it comes to traffic.

A source close to SimCity told Rock, Paper, Shotgun that "servers are not handling any of the computation done to simulate the city you are playing," confirming what we already know. "They are still acting as servers, doing some amount of computation to route messages of various types between both players and cities. As well, they're doing cloud storage of save games, interfacing with Origin, and all of that. But for the game itself? No, they're not doing anything."

Check out UKAzzer's debugging expose below.