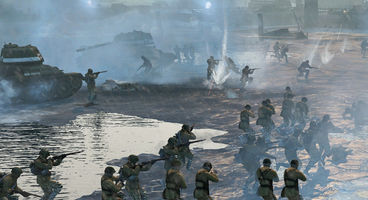 Not in Los Angeles enjoying some Company of Heroes 2 single-player campaign? Well, that won't do! SEGA has released the E3 show floor demo onto the Interwebz, and it can be accessed via Steam's store page.

The mission is to be included as part of the open beta for Company of Heroes 2 currently running, as testers will notice the Campaign button light up. It's called 'The Land Bridge to Leningrad'.

It will be a part of the open beta until it expires June 18th. In the demo level, which is a complete mission, we have to cross a frozen lake under heavy German fire.

"Players who have the beta installed will notice the Campaign button on the title screen is now unlocked. Clicking on it will take them to the mission select screen where the demo can be launched," informed SEGA. "New players will need to download the Open Beta from the game’s page on Steam." The Steam store page is here.

There are tutorial videos available in the open beta build to help newbies grasp the basics. For the Motherland!