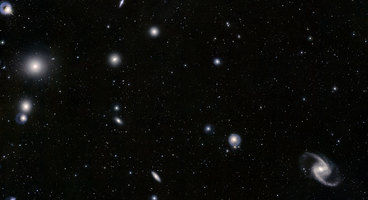 The developers behind the Xbox One have developed a tech demo created with NASA to push the system's limits by mapping out 35,000 light years of space in all directions.

Acccording to Frank Savage, his team began the experiment with the system by searching for a "giant set of data" to test the Xbox One's computational horsepower.

"So we went to NASA, because NASA has this really cool database. It has every single celestial body in the inner solar system, including planets, moons, asteroids, comets," related Microsoft's Geoff Henshaw, "The result is a tech demo simulation of space based on out to 35 thousand light years of data which tracks the position, velocity and orbital trajectory of every single subset of asteroids between Mars and Pluto. Each of the 40,000 asteroids are calculated and rendered, presenting its time and place to a high degree of accuracy."

"If a developer wants to do really crazy stuff we can see how he can map and compute 330,000 asteroids in real-time via global cloud computing," he continued, "There are 500,000 updates per second from the cloud to Xbox One. Developers tell us this is a miracle for them. Even the highest of highest PCs could not do all of this at once, it really takes global cloud computing resources."

"We're just scratching the surface of what can be done," he concluded.