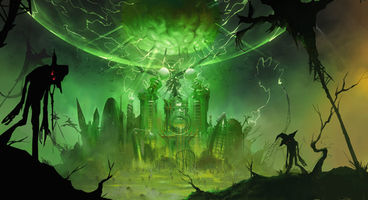 Their Oz project isn't necessary dead, "we can always launch another campaign in the future." Alice is far more pressing as they have a "rapidly closing window of opportunity."

Ditching Oz for Alice right now presents a "cleaner, faster" and higher chance of success for Spicy Horse. McGee also promises a "better and stronger" Oz proposal if and when it does return to crowd sourcing. Kickstarter employs strict policies when it comes to project campaigns as they don't allow multiple to run.

Spicy Horse and American McGee describe their decision in the 'End of the Rainbow' update.

The Oz campaign has to end. There are two realities driving the decision.

First, we’re facing a challenge with the Alice film rights. Since working to remove it from the Oz campaign we've been unable to launch it as a separate campaign here on Kickstarter – the submission has been rejected multiple times and our appeals have failed (multiple campaigns are not allowed). To launch a campaign for the Alice films rights means we must first shut down the Oz campaign.

Second, we wouldn't consider shutting down the Oz campaign if it were trending towards success. As it is, we've reached 15% of our goal with 20 days left in the campaign. Projections suggest we’ll hit 30% of our goal by campaign end. I've been telling myself to remain optimistic and see this thing through – but when the reality of our funding trend is combined with the pressure of the Alice film rights situation...

For Oz, we can always launch another campaign in the future. On the other hand, the Alice film rights are only within reach during a rapidly closing window of opportunity. We’ll sacrifice Oz today in order to have a real chance with Alice.

McGee and his studio are seriously hoping fans will be able to help them secure the rights to Alice. "Securing these film rights would be nothing short of a major coup," he described. "We’d control a significant portion of Alice’s future. Being able to produce animations, feature films and related merchandise means keeping Alice’s world fresh, no matter what else might happen with the game portion of the property. I hope you’ll join us in making this a reality."

To learn more of Spicy Horse's Alice plans visit the official Facebook page. They will have an announcement later this week for the Alice Kickstarter campaign, and they've already posted the video for it - viewable below.