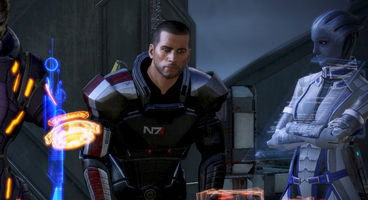 Lead writer Mac Walter has said the next Mass Effect from BioWare won't be using any of Commander Shephard's 'events' from the first three games as anchor points in the next instalment.

One of the team's key goals is that it can't "just feel like a spin-off," that it must be a Mass Effect adventure "at its heart, at its core." No Shepard or "Shepard specific companions."

BioWare had already made it quite clear they wanted a clean break from the Shephard saga, but now we know they also intend to avoid the subject in narrative too.

"Well, I can’t get into details, but the idea is that we have agreed to tell a story that doesn’t relate necessarily to any of the Shepard events at all, whatsoever. Beyond that, that’s what we’ve been deciding for awhile," said Mac Walter.

"But throughout it all, one of the key things is that it has to be Mass Effect. It can’t just feel like a spin-off. It has to feel like a Mass Effect game at its heart, at its core. Just without the Shepard character or the Shepard specific companions."

"It’s been 18-19 months since it came out and my thoughts on it are that we addressed it the best we could in the extended cut. We’re obviously not going to be changing anything now. We’re only going forward."

Walter touches on the player's hand being forced after having so much freedom throughout was what likely caused the backlash to BioWare's choice of endings for Shephard. "You know, you’ve been given free choice to make all these decisions with this character, with the fates of millions of people, and then, you don’t get to choose your own fate."

"And I’m not saying that our decision was wrong or right. I think we just underestimated the impact that would have on certain players. To be fair, I get people, especially at the Cons, who will say, “I loved it. It was heart-wrenching, but I felt it was right for my Shepard.” And to me, that’s why it was the right path," Walter told Complex Gaming.

"But because there was no choice, it was going to be right for some people, and for others, in the middle, and other people were obviously very upset about it. In hindsight, I don’t think there was anything we would have changed about that, but it is a really good lesson learned."

The next Mass Effect is being developed using DICE's Frostbite 3 engine, as is Dragon Age: Inquisition.