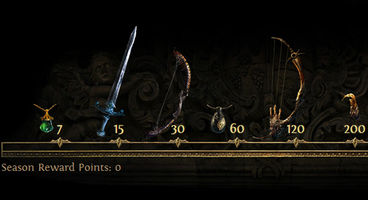 Developer Grinding Gears has announced Season Two of their level grinding contest in Path of Exile in which players compete to see who can grind their character up the fastest to win rare items.

According to the developer on its Events page, "Path of Exile race leagues are short duration events where players compete in a fresh economy to win prizes. With durations ranging from minutes to one week, they allow players to demonstrate mastery of the game.

"We're now grouping race events into seasons. Season One ran from February 23 to April 7 (NZT) with a total of 109 events. Season Two runs from April 20 to June 2 (NZT). We've taken feedback from Season One on board and have adjusted the race times, types and prizes for Season Two. There are now additional random Unique item prizes awarded at the end of every event."

The developer has also revealed a new "Signature" event, a 135 minute solo grinder which disallows partying. The event will repeat 45 times throughout season two, with the top three players being singled out with an artistic tribute, "Demigod's Triumph".

Path of Exile is still technically in beta, though it has over 2M registered users.