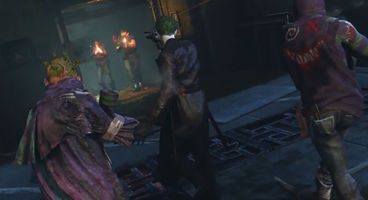 However his studio has solely focused on multiplayer, leaving WB Montreal nothing but the single player campaign to work on with "no kind of interference".

Neither side of the experience has "distracted or detracted" from one another, assures Cornish. The studios have worked together to ensure a "consistency of tone," he adds.

"It's something that we bore in mind; there can often be cynicism in some quarters - not in others - about this. And I think the two things that are very important to stress there are - these are being developed in parallel, so the single player is being developed by Warner Bros. Montreal, with no kind of interference or distraction from Splash Damage, who have been purely creating the multiplayer component. It's the same disc and it's a component of the same product, but neither one has distracted or detracted from the other," the creative director explained to OXM.

"And we've worked together to ensure consistency of tone, because they're the same Arkhamverse and in the same fictional window. So that was the first thing - if it's the same team doing both, then I think it's a bit more understandable that people have reservations, to be like "well hold on, can't those guys be making me more single player levels instead?" so it was important that there were two separate studios, both playing to their strengths."

The multiplayer wasn't included as some 'bolt on' after thought but discussed and explored before being committed to for Arkham Origins. "...secondly, this isn't a sort-of cynical, box-ticking exercise of some suit saying oh, this has to have multiplayer so let's just bang some in there. It wasn't that at all; it was a discussion about, what would the natural growth of the franchise be like? And it's a really cool premise! That simple premise of, hold on, what would invisible predator be like if you were stalking other human players? And again, not just gang members but elite gang members."

He continued: "...no-one wanted it to feel like something that was tacked on or that took away from the single player at all, and I'm really happy that its developed the way that it is because that is absolutely not the case. It's a distinct offering from a distinct studio." Splash Damage felt multiplayer was the inevitable future of predator challenges.

"Organic is one of the words that we throw around as well," explained Cornish.

"That's precisely what we were going for, is for it to feel natural and not like "what's this jarring extra experience that's been bolted on to the side of my smooth, sleek single player experience?" It's much more like a natural extension of something that players would really want to do - I want to challenge myself as the Dark Knight to take down the toughest AI in the world - other humans - the most dangerous prey, right?"