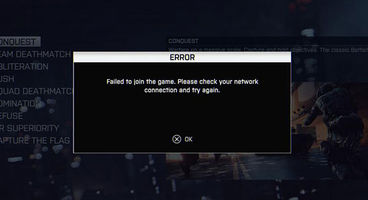 Over the weekend PC servers suffered a DDOS attack crippling multiplayer. They also issued an emergency server for PS4 and patched out a "very severe crash issue" for it.

Today DICE has posted a fresh update on the current status of Battlefield 4 issues and the steps the studio is taking. It's unclear when PC fans will get the next update.

We are aware of the frequent crashes in Battlefield 4 on PlayStation 4. We are hard at work identifying these issues and are hoping to get a game update out early next week. Stay tuned for more details as we can confirm them, and thanks for your patience!

We have an upcoming game update for BF4 on X360 that is currently undergoing final testing. We are hoping to get this update live soon, and will let you know as soon as it has passed final stages of testing and is ready for deployment.

We have a new game update in the works for BF4 on PC aimed at fixing a number of remaining issues in the game. We will have more details on the contents of this update and a rough timing estimate at a later date. You can always find the latest information on upcoming updates in this thread.

On Saturday producer Ali Hassoon responded to the DDOS attacks. "Hi guys, we are being targeted by a DDOS, but working on fixing it asap. I'm sorry somebody is ruining your and my day. Rest assured we are doing our best to mitigate the situation though." Servers were left crippled preventing multiplayer matches.

Friday's US launch of Battlefield 4 for PS4 came with major problems too. "We are deploying a new server to the PlayStation 4 platform," Hassoon posted on Sunday, "you might be disconnected from your session as servers are restarting to apply the new patch. The server update addresses a very severe crash issue on the PS4."

The anger on the Battlelog forums is intense with some calling for PS4 gamers to be compensated with a free upgrade to Battlefield Premium for having their next-gen launch made FUBAR.