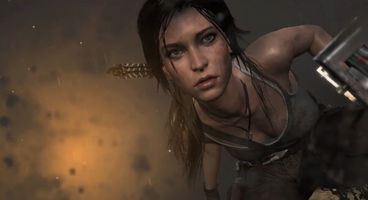 Eidos Montreal are bringing Tomb Raider to Xbox One and PS4 next year with the Definitive Edition, which is 'more than just a facelift' as it brings significant rewrites to technical code and attention to detail.

Will PC fans of the new Tomb Raider see the fruits of this labour? It's "our time to celebrate this version" for next-gen, says executive producer Scot Amos, but it could.

During a Q&A on the Eidos forums, Amos was asked by a user how they could justify full sticker price for the Definitive Edition with a 'lack of new SP content and a facelift'.

"If it was 'only a facelift' AND we were only reselling it on the same platforms we'd already shipped it on, I would see your point. But as we're selling it on a new platform, with a lot of development work put in to custom craft it for the new platforms; with the new additions for the aesthetic, the physics, the particles, the lighting - taking advantage of next-gen features - so I absolutely stand by our decision to offer up Definitive Edition the way we are," Amos replied.

A lot of new visual flares have gone into the game with Xbox One and PS4 supporting the previously PC exclusive feature of AMD's TressFX for Lara's hair. This level of physics simulation is being more broadly applied to include weapons and tools Lara picks up throughout the game. Lara herself is being 'remodelled' as are major NPCs.

"A few of our engineers were dedicated to improving physics both on Lara and in the world. A few quick examples - Lara has equipment on her that she acquires as she goes through her adventure. The climbing axe, her radio, her bow and a quiver of arrows, etc," he explained. "All of these now have subtle but simulated physics on them so as she runs, jumps, falls, stumbles, they react accordingly giving her more grounding the world."

"Then the world itself... we added so many objects, plants, trees, and then wind and weather effects that also have physics simulation built into them to react with each other. Wind will make trees and leaves sway or flutter; cloth flaps against light or heavy winds accordingly; particles and Lara's TressFX hair will drift according to the directional wind impact. All-in-all it adds a great additional depth and realism to the world."

PC gamers, used to the finer things in life, are wondering when this Definitive Edition will come to desktops?

"Today we are only talking about Tomb Raider: Definitive Edition on PS4 and Xbox One," said Amos.

"It's our time to celebrate this version and its arrival to market come January. If a future platform comes along or is demanded by the fans, we are also open to exploring opportunities where we can deliver a great Tomb Raider experience if it makes sense for everyone."

"We are very happy with the PC version we released and felt these new additions and changes were something custom just for next-gen consoles at the moment."

Crystal Dynamics are busy working on a new instalment in the new rebooted series of Tomb Raider which will continue on after the shipwreck survivor adventure. A canonical bridge is being released in comic form to link events.