People "have the right to be cynical" about Batman: Arkham Origins 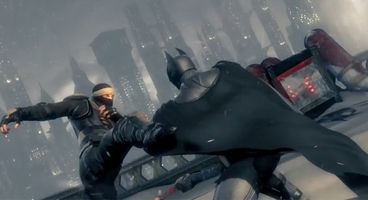 WB Games Montreal is behind Batman: Arkham Origins, not franchise creator Rocksteady, and so creative director Eric Holmes says people "have the right to be cynical" about what type of game this will be.

He implores those who can to try it out at event booths, and that fans will see it's "authentic and uses the same underpinnings" as the Arkham series. There's plenty to draw a crowd with.

Gadgets are a huge focus for Batman and WB Games Montreal are pulling any punches, but it's their story they feel strongly about that while impress Batman fans.

"Come and play the game at one of these events where we bring the game. And I think as soon as you've got the pad in your hand, you're going to see that this game is authentic and uses the same underpinnings and core mechanics of the previous Arkham games." There are plenty of new tactical options for Batman gamers.

"And I think we have a great story…I can't tell you too much about…but I can tell you I'm really excited about our story," he said. "I think it's a very important Batman story and I think fans are going to love that probably more than any other thing in the game." Arkham Origins explores Batman's early crime fighting days and how he made a name for himself.

Rocksteady meanwhile is believed to be working on a stylish Batman prequel due possibly in 2014.