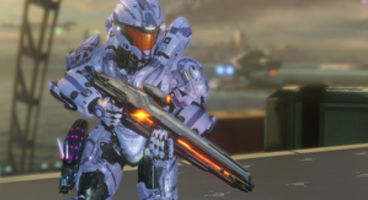 343 Industries has announced an update on the title update. It's due "sometime this week," but they can't provide a concrete time for fans. There's plenty of "bugs, glitches and issues" taken care of.

They've provided a changelog for the tweaks imminently due which practically touch everything. 343 also give apologies for an "accidental troll of epic proportions" over the Majestic Map Pack.

Apparently the system they use to make sure DLC is downloading just fine accidentally spat out the upcoming Majestic Map Pack a week early, letting users get 99% of it.

"Some “lucky” players were alerted to the miraculously early availability of the Majestic Map pack in the last couple of days, and in an accidental troll of epic proportions, were able to get 99% of the way to downloading the Majestic Map pack, basically a week early," blogged 343 Industries.

"This was caused by an error in the way we test the real map download on real Xbox Live, ironically to make sure there are no hitches when you try to do it (again, in some cases) on the 25th. Our sincere apologies for the error, and double apologies for the especially troll-like experience."

Below is the latest changelog for the 'due this week' title update:

• Reduced the range of the Boltshot’s damage scaling over distance. The previous effective range for 1-hit kills was around 20-25'. The range has been reduced to 15'.

• Fixed an issue where modified loadouts were not being saved correctly.

• Fixed an issue where attempting to sprint while crouching using “hold to crouch” would cause players to be unable to shoot for 1-1.5 seconds.

• Fixed an issue where some players were not able to get into matches on new map/game variants after playlist updates.

• Fixed a DLC-related Join-in-Progress issue that kicked players back to the title screen.

• Fixed an issue where one player per session was unable to stay scoped with the Flagnum.

• Fixed an issue where clients playing multi-round matches were not propelled by Man Cannons after the first round on Wreckage.

• Fixed issues with friendly fire against vehicles. If FF is disabled, damage/EMPs from friendly sources will no longer damage vehicles that are fully controlled by your team.

• Fixed an issue with where the Wraith secondary turret became disabled when shot with a Plasma Pistol. The feature has been updated to be consistent with previous Halo titles.

• Friendly fire turned off in Flood to prevent exploits.

• Fixed Flood character models to allow for Warthog and Mongoose use.

• Fixed an inconsistency with King of the Hill deathcam.

• Fixed an issue where the Grifball would get stuck in geometry and never respawn.

• Fixed the issue for Extraction where players did not regain full control of their character for extended periods of time after interacting with a site.

• Fixed multiple Extraction scoring issues, including an overtime fix that ensures that a victory will not be awarded to a team who is controlling the go-ahead extraction point when the game ends.

• Fixed an issue that did not allow players to create respawn timers or disable instant respawn in custom games.

• Fixed an issue on Shatter where players couldn’t start a custom Dominion game.

• Fixed an issue where the Ordnance game options reset when scrolling up or down in custom games.

• Fixed an issue where custom game descriptions did not appear in the “Settings” preview screen.

• Fixed inconsistencies and bugs in the final death cam for custom games.

• Fixed an issue where the “Dedicated to Crimson” Achievement could not be unlocked.

• Fixed an issue where players in Spartan Ops Episode 6 Mission 1 were able to look around before the vignette.

• Fixed a selection of issues where theater clips were missing map-specific audio, including ambient noise and announcer voice.

• Fixed an issue with Forge pieces and the shadows they create.

• Fixed an issue where some saved films of Forge games featured no Forge lighting.