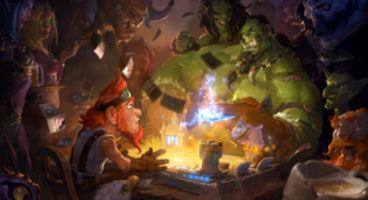 Want some collectible cards to do battle with in the Warcraft universe? Huh? Well?! Of course you do and Blizzard has just the thing. It's called 'HearthStone: Heroes of Warcraft' and will be cross-platform.

They want a "far more fluid" card-based strategy game than what others have. Packs are likely to be "around $1" each, with an internal Blizzard team of 15 behind the game. Pick your chin up off the floor.

"We've always loved collectible card games at Blizzard, so it's been exciting to bring everything we love about the genre to life in Hearthstone," said Mike Morhaime.

"We're putting a lot of focus into creating a fun new game that's easy to pick up and play, but also has a lot of depth. We can't wait to share it with everyone." HearthStone: Heroes of Warcraft will be hitting PC, Mac and mobile platforms like iPad. Sorry, April 1st is two weeks out. Just saying.

"Sheathe your sword, draw your deck, and get ready for Hearthstone - the fast paced strategy card game that's easy to learn and massively fun. Start a free game on Battle.net and play your cards to sling spells, summon creatures, and command the heroes of Warcraft in duels of epic strategy."

The game made its debut at PAX East in Boston, with a playable demo.

It was revealed in February 2012 that Blizzard was doing something in the free-to-play arena. A beta is available to be signed-up for over at www.playhearthstone.com.