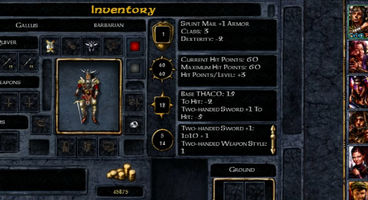 This has meant work on Baldur's Gate II has been put on "indefinite hold," and that includes the current patch. The worst case scenario is being stuck in "legal hell for a while."

Beamdog released Baldur's Gate: Enhanced Edition for PC and tablets to mixed fanfare. Now the whole endeavour is under threat by a lawyer-shaped surprise attack.

"The prognosis is mixed,” studio head Trent Oster told RPS. “Best case, we can sort this out soon. Worst case, this could be in legal hell for a while. I like making games, but this contractual dispute bullshit keeps me up at night.”

"Baldur’s Gate II: Enhanced Edition is on indefinite hold, as is the current patch,” he said. “Baldur’s Gate III, we are still interested in the concept, but currently I’d say were very demoralized.” Yes they had hoped to actually develop a sequel in the RPG series but they can't even get the second game out the door, or patch the first.

BG: Enhanced Edition released in November 2012. Beamdog claim over 400 improvements have been made.