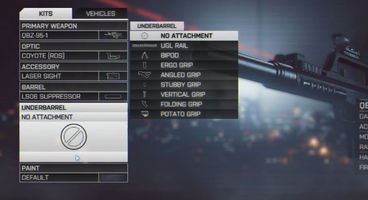 Battlefield 4 Lead Core Game Designer Alan Kertz explains the changes DICE have made to weapon customisation in the upcoming shooter. There's also a lot more vehicle customisation to choose from.

3D models now represent the weapons when making adjustments, as well as a clear breakdown on the affects of each add-on. Secondary weapons can be altered too.

Grips, canted sights and even paint jobs let us fine tune our implements of war. Weapon systems can be swapped out for vehicles depending on the role you'd like for them.

An adaptive camouflage system is teased for blending vehicles into the background to make them harder to spot. DICE are also implementing 'tiered reloading' which means swapping to a different weapon mid-reload and then swapping back doesn't restart the whole reload animation; you just need the clip putting in.