24 September 2013 | By Jonah A. Falcon
Social networking site Raptr has announced that Defense of the Ancients 2 (DOTA2) has become the MOBA of choice among its membership, leapfrogging League of Legends. 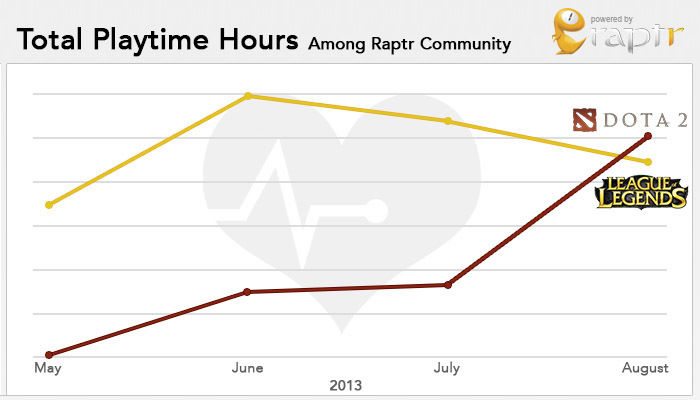 According to the site, "DOTA 2 first passed LoL in total players on March 3 — coincidentally, right when LoL servers went down (possibly due to a denial-of-service attack). That gave DOTA 2 a free shot at taking the lead for a day. A few isolated days followed where DOTA 2 came within a few hundred players of LoL’s total…or leapfrogged it by six or seven thousand without warning."

Raptr expects League of Legends to recover its lead, but DOTA2 has probably already eroded its membership.

"With the glow of The International pretty much faded and LoL’s incredibly popular World Championships happening last week, it’s likely LoL’s numbers will angle straight up again in the middle of the month. But the recent erosion of its player base should be a serious cause for concern if the trend continues after the World Championships. And DOTA 2′s numbers prove that if Riot Games opens the door, Valve’s increasingly popular MOBA will walk right on through," explained the site.

It'll be interesting to see how Infinite Crisis, the heavily anticipated DC Comics-licensed MOBA, will affect both MOBAs, if at all.

Related Games:
League of Legends, Defense of the Ancients 2