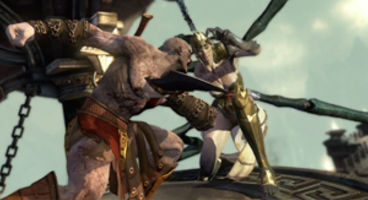 By the beard of Zeus! Players of God of War: Ascension have been having quite a troubling time tackling the Trial of Archimedes section near the end of the game, and Santa Monica Studio agree.

Title update 1.03 will be releasing to address the punishing stage while "still preserving the level of challenge" you'd expect near the end of the game. It involves more green and blue orbs.

There are also some new customisation options being added but those with audio issues won't get any relief this time around, warned the God of War studio.

"We received extensive feedback from the community that the Trial of Archimedes section (Chapter 28) near the end of the game was excessively challenging," explained Aaron Kaufman. "In every God of War game, establishing a well-paced difficulty ramp towards the end of the game is paramount to us. Based on player response, the degree of challenge offered here was short of our goal of being perfectly balanced."

"In the 1.03 update, at the end of each elevator stage (three total), players will now receive a measured amount of green health orbs and a nominal amount of blue magic orbs. This change affects all difficulty levels."

"We are confident this revision will address feedback regarding Trial of Archimedes while still preserving the level of challenge appropriate for this late section of the game."

God of War: Ascension released on PS3 this month.