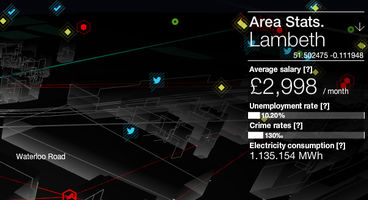 In a most curious move Ubisoft has decided to do some viral marketing for Watch Dogs, which is all about the manipulation of data, by launching a website that gathers and graphs real world city data.

For now it's limited to London, Paris and Berlin. It's to give a glimpse into the "hyper-connected" world we live in, as it collates public data available from various sources and relays it in 3D mapping.

To fully understand it you'll need to visit the website and give it a try. Frankly the implications can be quite staggering that this kind of data is just 'out there' to be harnessed.

"With WeareData, visitors will discover that much of the hyper-connected world imagined in Watch Dogs already is a reality, and that everything and everyone is truly connected,” say Ubisoft. “The amount of and potential uses for public and personal information that is readily available online has never been more relevant, as evidenced by today’s headlines."

“WeareData is designed to provide a glimpse into this reality and to give visitors a new perspective on the cities in which they live.” Want to know what the average income is for a city district or how much juice their chugging?

Real-time data is streamed into WeareData's 3D mapping of Berlin, Paris and London. The maps are fully explorable and can be zoomed in to see the 3D elements pop. All kinds of data is streamed through like bicycle routes, Wi-Fi hotspots, subways, CCTV cameras, public transport schedules...

"This is not fiction anymore. Smart cities are real, it’s happening now. A huge amount of data is collected and managed every day in our modern cities, and those data are available for everybody," continued the site.

Check out Watch Dogs WeareData for yourself.