Firaxis has 'goosed up' the difficulty in XCOM: Enemy Within 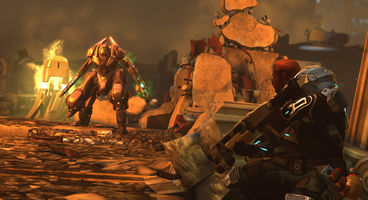 Lead designer Ananda Gupta from Firaxis has said the team has "definitely changed" the power curve for players with XCOM: Enemy Within. Classic and Impossible modes have longer research times.

They've also slowed down soldier progression. He also reveals the studio never thought Ironman would become so popular - that it would be just "this little thing".

Apparently the difficulty had been scaled down in Enemy Within until one of the developers proved the game was winnable, which was on Impossible Ironman.

"We’ve even goosed that up some," said Ananda Gupta told NowGamer, regarding the harder difficulties.

"We’ve definitely changed the power curve of the player a little. On classic and impossible difficulty, tech research times are a little bit higher, so those players might want to look at some labs. We have slowed down soldier progression a little bit so it takes a little bit longer to get to Colonel and to get to that high rank."

Ironman has become a test for any XCOM commander, but Firaxis believed it would only appeal to a small segment of the community and not become quite the fan benchmark it has.

"When we put in ironman mode we thought that ironmade mode was just going to be this little thing, the idea that you can only have one save and all your decisions are permanent, we thought, you know, that’s going to be a vanity thing, a few people will play that and it will have its fans."

"Same thing with impossible," he added. "I think the Steam stats indicate that 0.7% of players have beaten the game on impossible. I don’t know how many have beaten it on impossible ironman, but anybody who does has my respect."

Impossible isn't quite as 'impossible' as the name implies, which means it’s not getting dumbed down.

"There was widespread adulation for our systems engineer," he joked. "I was getting nervous that nobody was going to beat it on impossible ironman, but Ryan came through for me." Normal difficulty meanwhile is apparently a little easier to swallow.

"Classic and impossible difficulty are definitely harder than in Enemy Unknown," Gupta said. "On normal difficulty I would go so far as to say the game is actually maybe a little easier." XCOM: Enemy Within introduces a number of new features such as MEC suits and gene manipulation. It releases on PC, Xbox 360 and PS3 November 12th.