27 September 2013 | By Simon Priest
5th Cell's Scribblenauts returns this week with Scribblenauts Unmasked: A DC Comics Adventure, blending the awesome universe of DC Comics with the incredibly fun power of Scribblenauts's 'create anything'.

Gotham City, Metropolis and Atlantis all star in Scribblenauts Unmasked with well-known heroes and villains in procedurally-generated quests. Over 2,000 DC objects to be called upon.

We can even create our own superhero with customisable powers. Maxwell and his sister Lilly are leading the pencilled charge in Scribblenauts Unmasked.

Scribblenauts Unmasked: A DC Comics Adventure released this week on PC. Nintendo 3DS and Wii U versions for Europe remain 'TBA' whereas they've also released in the US. 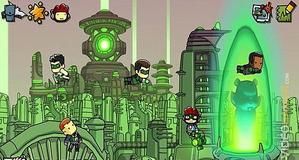