29 November 2013 | By Jonah A. Falcon
Games Workshop has announced a new free-to-play game that's a combination of collectible card game and tactical strategy game, melding both gameplay mechanics into the Warhammer 40,000 universe, with Warhammer 40,000: Space Wolf, developed by HeroCraft.

According to the official site, "Lead your squad into fierce battles in a turn-based tactical combat game, using collectible cards to drive the on-screen actions of the characters. Use the environment to gain an advantage over foes. Find your own ways to accomplish missions.

"Build your own deck. Complete missions and challenges to get new powerful cards, upgrade them at the Iron Priest's Forge and make your enemies tremble in fear."

Gamers can check out the official site here. HeroCraft also released an announcement trailer, as seen in the video below. 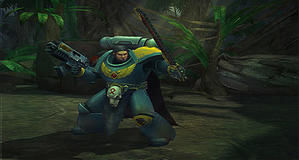