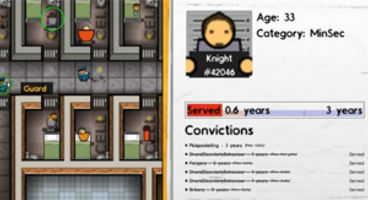 Introversion today release Alpha 6 for Prison Architect and they have made some "big changes" to the prisoners as all now come with an "estimated risk category" based on their criminal history.

They've also given different types of uniform to better show who's a wolf and who's a lamb. It's been a "long term aim" for the team, creating a more 'realistic' imitation of prison life.

It's not as simple as just separating different uniformed prisoners from one another though, warns Introversion's Chris, as they've also include an "internal "traits" system".

"We’ve made some big changes to the prisoners. All prisoners now have an estimated risk category - minimum, normal, or maximum security, reflected by different coloured uniforms so you can determine the category from a distance. This has been a long term aim for us and better reflects the reality of modern jails where the most dangerous inmates are separated from the gen-pop. There are, however, some subtleties to be aware of," blogged the indie studio.

"As in life, prisoners are sometimes mis-classified and we thought it would be cool to have some doubt about whether a prisoner really is as dangerous as he first seems, or perhaps worse: actually has been housed within the general population, but is a grade A bat-shit lunatic."

"To achieve this we have implemented an internal "traits" system of which you have no visibility. These traits determine if a prisoner is violent, or murderous, or destructive, or all of the above and more. They determine how the prisoner behaves when he is angry or when a fight breaks out nearby. This system is totally internal and you never get to access it, so the only way to really see whether you have a pussy-cat or a Bane is to watch how they behave."

We finally get 'rap sheets' implemented to let us know our prisoner's criminal past. This forms the basis of the automatic classification system now present in Alpha 6.

"You can't believe everything you read and we also show a plea, so a Prisoner who has been convicted of Murder may have pleaded Not-guilty and may, in fact, by innocent of the crime," continued Chris. "This poor soul would pose no threat, and a miscarriage of justice has caused him to be surrounded by thugs and murderers - he would rapidly become a target and if you don't notice, may up slumped in the corner of a shower with a shank sticking out of his liver."

There's little doubt that the game will be "deeply unbalanced for a while," as they figure out how to better fine tune the new drastic system. Eventually Prison Architect will add onto this system and others a lot more, letting us eventually reclassify prisoners based on their behaviour, as well as grant or deny parole. We can now decide when and what type of new prisoners we want brought to our penitentiary.

Introversion has released a new video to highlight the changes to Prison Architect with Alpha 6.