His name was Shaun “The Master” Ciaschi. His rap sheet states that while addicted to heroin he killed four men, ten women and seven children. He was most definitely not a nice lad. Mr. Ciaschi, as it turned out, would be headed to ‘JP Heights’, my not-so maximum security prison that I painstakingly created from the ground up to house society’s worst offenders. Sometime after his incarceration, our jump suited friend decided to take advantage of an open door, inciting a riot over what some might term “less than ideal living conditions” in order to create his escape. Three days of game time later and my prison now more closely resembles the ramshackle ruin from the third season of The Walking Dead; packed with corpses and the abject stench of failure.

Of course, this is just one of many stories that Prison Architect can tell as you monitor the day-to-day lives of these convicts. Essentially, how well you manage your duties can create a chain of events whereupon you either destroy your prison wholesale, or, reinforce your grip over its denizens if you’re savvy enough to do so. In spite of the fact that in this case many hours of work ended up going down the toilet, failing in Prison Architect never feels like a reductive state. Rather, each time you fail there is always something to be gained. Whether it’s a deeper understanding of how to keep your prisoners happy or more insight gained into an infrastructure issue (flooding was a perennial problem of mine), Prison Architect always ensures that you walk away educated rather than frustrated. 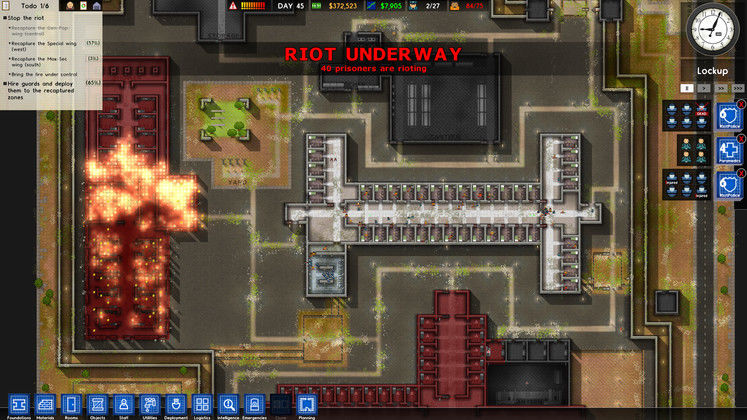 If you can see this, you're doing a naff job of running your prison. Get it sorted!

If the notion of constructing and maintaining a prison seems like a herculean task (it certainly did to me in the beginning), you may consider your fears allayed, as the clever clogs over at developer Introversion Software have managed to make learning the ins and outs of managing your very own criminal dungeon an engaging and easily graspable task. Primarily this is achieved through Prison Architect’s single-player campaign which, when compared to other similar titles, is somewhat of anomaly least of all because it’s turns out to be an absolutely belting experience.

What really separates the campaign in Prison Architect from its genre stablemates is the well-crafted narrative threading through its various chapters. It’s a surprisingly decently told story that brings in elements of betrayal, mob violence and prison sabotage in such an interesting way that I’m not sure I could confront another charmless campaign in similar titles ever again.

Once into the game proper and beginning with a ready-made prison, the campaign goes about tutoring players on everything that they need to know to construct their own grey bar hotel in addition to being able to maintain it once the groundwork has been lain. First off, the campaign impresses the need to create foundations for your various buildings, before attaching access to them such as doors and other optional things like windows and pathways to name a couple.

Once the foundations have been laid, a building can then be modified to function as a key part of the prison infrastructure ranging from such facilities as kitchens and canteens, through to the likes of showers and garbage disposal units. Naturally, it isn’t as easy as just designating a generic set of foundations to become a particular type of building either, as various infrastructure types have specific requisites that must be met before they can be constructed. A warden’s office for example, could require a chair, desk and filing cabinet in order to be built, whereas a canteen might need serving tables, eating tables and benches so that it might be brought into existence.

It’s not all just bricks, mortar and fancy furniture either; every building that requires power or water has to be hooked up to the appropriate utilities of both the latter and the former in order to function. Like everything else, this requires both time and money as you command your workforce (which you must also purchase yourself) to lay down cables, connect pipes and generally get everything sorted in time for when your prisoners start stomping about the place. 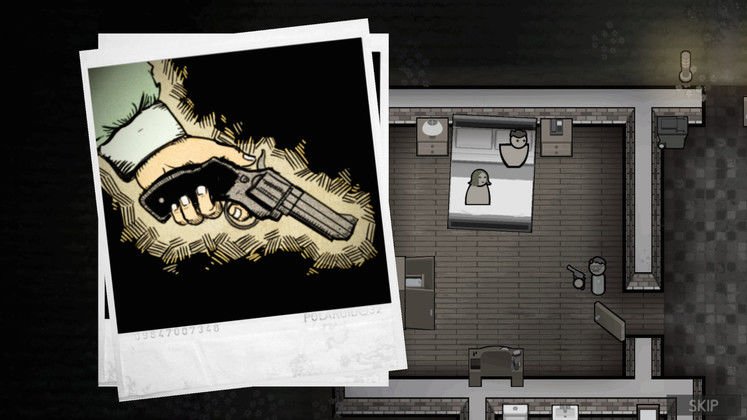 It's not all managing disgusting prison dinners and picking up the soap from showers, Prison Architect’s campaign also boasts a great deal of intrigue too

Speaking of which, there is the people factor to consider too. Staff need to be kept rested or else they become exhausted (a staff room can help with this), while arguably the most important and difficult group of folks to keep happy are, somewhat expectedly, the inmates themselves. Clicking on each of your prisoners gives you a full breakdown of their personal demographics, neatly informing the player on everything from their name and crimes committed, to the length of their stay and the sort of security that they require.

Prisoners that misbehave can be punished in a number of different ways too from being thrown into solitary, having their bunks searched at a moment’s notice or otherwise detained without privileges for as long as deem necessary. In most cases though, chaotic and disruptive behaviour stems from their needs not being met and a handy graph allows you to see where you need to tighten up in order to keep your prisoners in a good state of mind. In most cases, unruly prisoners are usually that way because they are lacking in either food or entertaining past-times, both of which can be tackled by providing the appropriate infrastructure; namely a decently stocked common room and a food-stuffed canteen, respectively.

Certainly then, while it’s far better to address the problems at the root of your prisoners displeasure rather than just punishing them willy nilly – punishment itself can actually work in moderation and acts as an effective disciplinary tool to straighten out any potential troublemakers. It goes without saying though, that prevention is better than cure and in this case, assigning guard patrols to cover the busiest areas of your prison will go someway to preventing the inmates from running wild and smashing up the place. Of course, like everything else that’s worth having in the game, guards cost money and, well, there are two main ways to go about getting it.

The most easily attainable way to secure precious funds is through the admission of the prisoners themselves. You see, the prison receives between $300 and $2,500 for each inmate delivered, however, the amount is actually dictated solely by the security rating of each criminal and its here that a nifty risk/reward dynamic manifests itself. You see, the more dangerous prisoners unquestionably require more expensive infrastructure to keep them controlled, yet the monetary reward is significant if you’re able to accommodate them.

Another and much more interesting way that funds can be generated, is through the contracts and grants scheme that Prison Architect boasts. Here, increasingly large sums of money will be provided according to the completion of a number of pre-requisite conditions such as hiring a certain type of staff or succeeding in constructing a number of specific buildings. These work really well in engaging the player too, as they provide additional incentive to plumb the depths of Prison Architect’s substantial creative scope. 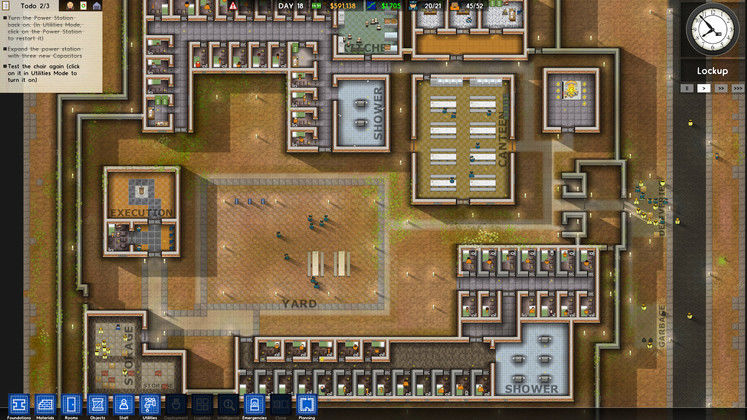 And what scope it is – Prison Architect only asks that you create and run a prison but how you do that, outside of fulfilling the fundamental requisites for each building type, is entirely up to you. You can literally build what you want, where you want and in the formation that you want; the game doesn’t restrict you at all. If anything, you frequently find that you’re second guessing yourself – never quite sure if you’ve covered all the angles and all the bases to keep everything ticking over perfectly; inevitably you haven’t of course, but that’s half the fun.

If anything threatens to mildly tarnish Prison Architect’s substantial achievements it would lay largely with the element of pacing. While it’s undoubtedly a lot of fun to build up your prison, the bulk of the game’s joy can arguably be found in dealing with a prison running at the height of its powers, all the while managing the day-to-day shenanigans of the inmates contained therein. It’s just a shame that it takes a fair old while to get there.

Visually, while the game is functional looking with characters that appear more like board game counters that anything, it can in no way be described spectacular. As such some folks, perhaps familiar with other more aesthetically appealing titles in the genre, might balk at the lack of sophisticated character models and environments on display.

In many ways, Prison Architect feels like the ‘Theme Prison’ game from Bullfrog’s golden years that we never actually got. Certainly, if Prison Architect’s extended stint in Early Access was any indication, developer Introversion, much like the aforementioned legendary British developer, had no shortage of ambition and this is certainly something that has translated into the final product because minor niggles aside, Prison Architect is a one-of-a-kind prison building experience rife with emergent stories the caliber of which we haven’t seen in some time.

Not feeding your inmates properly because you messed up the finances and thus end up causing a sixty man riot.