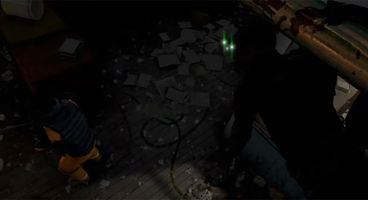 Expect some totally immersive plastic peripheral ceiling pipes to hang from with Ubisoft's next-gen Splinter Cell using Xbox One's fancier Kinect. It'll be a thing I'm sure. They already have "a lot of plans in the works".

Blacklist art director Scott Lee promises "Sam will be back." Last year Jade Raymond mentioned 'Natural User Interface' tech like Kinect and how she wants to "see that sort of stuff integrated".

"Sam Fisher and Splinter Cell is a big and very important franchise for Ubisoft, and yes they do support the franchise," Scott Lee told ArabicGamers in an interview.

"Obviously we're working very hard on current-gen systems and we're super excited that we're going to be across all platforms. For next-gen there are a lot of plans in the works, obviously we can't talk about that at the moment but I definitely look forward to seeing Sam in new adventures, bigger and better as we go along. Sam will be back."

In a chat with OXM last year, Ubisoft's Jade Raymond said: "I think we saw some great changes with the Wii and a whole bunch of people playing games that hadn't previously, and I think we saw another step with Kinect."

"As more of a hardcore gamer I want to see that sort of stuff integrated into hardcore games in a way that makes them better, because as fun as they are, I don't really play exercise games - I can't picture myself doing that. I'd love to be able to lean and look round the corner and just integrate more natural motions. The technology for those things isn't quite there, but I hope it will be soon." You heard her, start practicing your air vent crawling now.

Splinter Cell: Blacklist releases on Xbox 360, PS3, Wii U and PC August 20th in the US, 23rd in EU. Ubisoft have been very keen to show how this latest title brings back the traditional stealth elements of the series, whilst also keeping options open for those who prefer a less sneaky solution to fighting global terrorism.