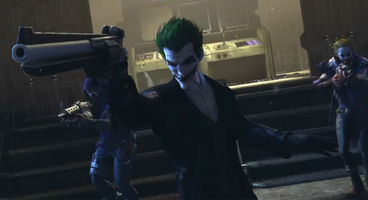 How will multiplayer work in Batman: Arkham Origins? Details have begun to emerge on how Brink developer Splash Damage plans to keep things tense and exciting for players going online.

It's an intricate little web the studio has spun. Basically it's a 3v3v2 multiplayer setup where two goon factions face each other, and get harassed by Batman and Robin.

Splash realised it would get boring quickly for those taking the role of the goons if they just had to contend with someone else playing as Batman, considering they'd hide.

To keep things tense for the goons, Splash decided to have two goon factions duking it out for control of strategic points around maps. The objective of the goons is to reduce the opposing super villain’s henchmen down to zero by bankrupting their respawn tickets. Losing a team member costs a ticket, which is similar to DICE's Battlefield.

However those playing as Batman and Robin are concerned with something else and that's 'intimidation'. The heroes want the fight to be broken up and so taking down goons will increase the 'intimidation level' and eventually end the fighting. Should a goon best Batman or Robin then intimidation takes a knock, and that faction earns a respawn ticket.

Batman and Robin have access to virtually all their single player gadgets, and unlimited used of Detective Vision to keep track of goons. This is to counter the fact your foes are always armed with firearms and other weapons. The goons occupy a third-person shooter approach like Gears of War.

Working together as a team is encouraged because of the hero threat to the goons, which has been a great consequence of Splash Damage's approach to the multiplayer. "We knew they needed to be really well outfitted to take on Batman and Robin, and to fulfil the idea of the hunter, hunted," said creative director Alastair Cornish.

"From one moment to the next the heroes can feel like the apex predators, the next minute, they might be trapped rats cornered in the grate network of a level by gangs who are using their enhanced vision and their items to pin them down. Elites have a suite of their own abilities and own weapons to turn the tables."

"Beyond that, the things we think are really going to hook people in are the customisation options, because Batman and Robin are fixed constants, even though there are different skins for them. The elites are where you can really stamp your own personality on the game. There are over 250 items to unlock, and you can customise so many different aspects of them and put a bit of yourself into the Arkhamverse."

Splash also pull a Star Wars: Battlefront where players, if they follow certain markers, get to fill the shoes of the big villains like Joker or Bane. The trade-off is no in-character respawn or health regeneration. Splash Damage is developing multiplayer, while Warner Brothers Montreal tackles the campaign.