Adelman will work on promoting the game, from "marketing to business deal negotiations to scoping out new business opportunities."

Chasm was Kickstarted successfully last year to the tune of $190,000, a retro 2D fantasy platformer with added hack and slash dungeon-crawling. It's set for release in late 2015 on PC and PS4.

“I am very excited to be working with Discord Games on Chasm,” said Dan Adelman in a press release. “While checking out the alpha, I was immediately drawn in by the beautiful art style, varied level design, and procedurally generated world maps. No two people will play the game in the same way. The whole package jumped out at me as a game I really wanted to be part of.”

It seems as though Adelman definitely likes his Metroid and Castlevania-style action platformers. He's also working on Axiom Verge, a sci-fi alternative to Chasm.

"I’ll be the first to admit – there are definite similarities in terms of the genre and overall framework," writes Adelman in a recent blog post. "Tight controls. Challenging boss fights and a wide range of enemies. But it’s the differences that really make both games stand out as prime examples of how much variety you can have within one genre. A genre that I tend to be a big fan of!" 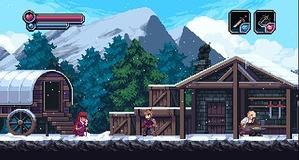